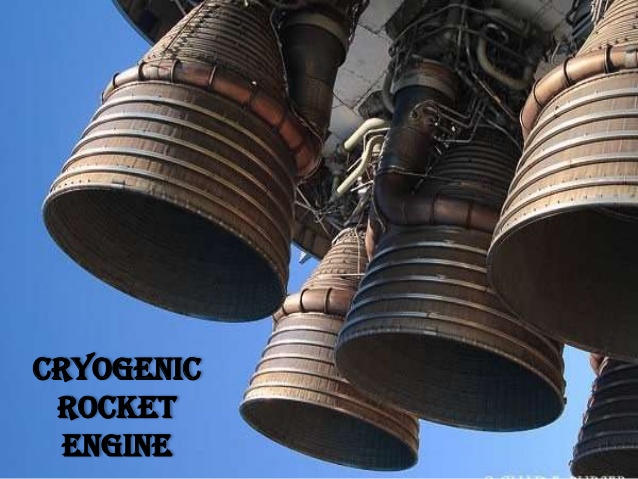 A cryogenic engine/ cryogenic stage is the last stage of space launch vehicles which makes use of Cryogenics. Cryogenics is the study of the production and behaviour of materials at extremely low temperatures (below -150 degree Centigrade) to lift and place the heavier objects in space.Continue Reading Cryogenic Rockets – Notes For W.B.C.S. Examination.

Description: Cryogenic stage is technically a much more complexed system with respect to solid or liquid propellant (stored on earth) stages due to the usage of propellants at extremely low temperatures. A cryogenic engine provides more force with each kilogram of cryogenic propellant it uses compared to other propellants, such as solid and liquid propellant rocket engines and is more efficient.

Cryogenic engine makes use of Liquid Oxygen (LOX) and Liquid Hydrogen (LH2) as propellants which liquefy at -183 deg C and -253 deg C respectively. LOX and LH2 are stored in their respective tanks. From there they are pumped in to turbo pump by individual booster pumps to ensure a high flow rate of propellants inside the combustion/thrust chamber. The major components of a cryogenic rocket engine are combustion/thrust chamber, igniter, fuel injector, fuel cryo pumps, oxidizer cryo pumps, gas turbine, cryo valves, regulators, the fuel tanks and a rocket engine nozzle.

Cryogenic means low temperature. It refers to technology of sub zero temperatures and cryogenic engines use liquid oxygen as the oxidizer and liquid hydrogen as the fuel. Oxygen can be kept in liquid state below – 183° C temperature, while hydrogen requires temperature below – 253° C to be in liquid form. Moreover, the liquid oxygen is very reactive. So, much care is required to ensure that both come in contact only in the combustion chamber. Use of the liquid fuel instead of solid facts helps the engine produce greater thrust. The engine’s capability in thus of placing a far heavier payload.

Apart from this technological care, two quite different state of temperature are required to be maintained. Low temperature is to be maintained to keep propellant in liquid state while very high temperature and pressure are created by combustion to create a greater thrust in the combustion chamber. The advantage of the cryogenic engine was that it would develop 1 ½ times the thrust of conventional liquid rocket engines using fuel storable at room temperature.

ISRO crossed an important milestone in the development of indigenous cryogenic upper stage for the GSLV when the first cryogenic engine was ignited at the Liquid Propulsion System centre, Mahendragiri. The engine made by LPSC was expected to be used as the upper stage in the third launching of the GSLV.The GSLV in capable of injecting 2500 kg. Class communication satellites into Geo-synchronous circular orbits at an altitude of 3600 km. Cryogenic engines are very useful in launching of heavy satellite launch vehicles like GSLV. India will become self-reliant in its space programmer after the development of this technology. The realization of the cryogenic technology would also help India to become a partner in space explorations and activities of other countries. Commercialization of this technology will get India precious foreign currency.