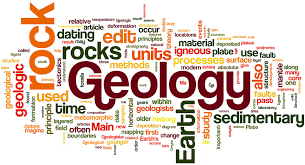 Unconformities happen for two reasons: sediment deposition stopped for a considerable time and/or existing rocks were eroded prior to being covered by younger sediment. There is no single time span represented by an unconformity. It depends on how long erosion occurred or for how long deposition ceased.

Some unconformities are easier to identify than others. For example, the contact between a very old granite and a younger sandstone is pretty obvious. On the other hand, figuring out whether two limestone beds are significantly different in age might require more investigation.

The type of unconformity (in other words, what we call it) is based upon what rock types are involved, whether it is the result of erosion or no deposition, and whether older sedimentary rock layers were tilted prior to being eroded. Let’s look at some different types in more detail.

A disconformity also involves erosion of sedimentary rocks. But here, the older rock layers were not tilted before they were eroded. In the least obvious case, the disconformity (the erosion surface) is parallel to the layering of both rock layers. Those can be difficult to identify and usually require dating of the rocks using fossils or some other method in order to know with certainty that the two rock layers are substantially different in age.

There are three basic types of contacts:

In this article , we consider in more detail the nature and interpretation of depositional contacts.

Relatively continuous sedimentation in a region leads to the deposition of a sequence of roughly parallel sedimentary units in which the contacts between adjacent beds do not represent substantial gaps in time. Gaps in this context can be identified from gaps in the fossil succession.

The boundary between adjacent beds or units in such a sequence is called a conformable contact.
For example, we say, “In eastern New York, the Becraft Limestone was deposited conformably over the New Scotland Formation.” The New Scotland Formation is an argillaceous limestone representing marine deposition below wave base, whereas the Becrft Limestone is a pure, coarse-grained limestone representing deposition in a shallow-marine beach environment.

In order to convey a meaningful description of a specific unconformity, geologists distinguish among four types of unconformities that are schematically shown in Figures 1&2 and defined in the Table.

Unconformities represent gaps in the rock record that can range in duration from thousands of years to billions of years. Examples of great unconformities, representing millions or billions of years, occur in the Canadian shield, where Pleistocene till buries Proterozoic and Archean gneisses. In  the classic unconformity between Paleozoic sedimentary rocks and Precambrian gneisses is shown and many introductory geology books show this contact in the Grand Canyon.

It is a special experience to put your finger on a major unconformity and to think about how much of Earth’s history is missing at the contact. Imagine how James Hutton felt when, in the late eighteenth century, he stood at Siccar Point along the coast of Scotland(Figure 3), and stared at the Caledonian unconformity between shallowly dipping Devonian Red Sandstone and vertically dipping Silurian strata and, as the present-day waves lapped on and off the outcrop and deposited new sand, suddenly realized what the contact meant. His discovery is one of the most fundamental in field geology.
For Guidance of WBCS (Exe.) Etc. Preliminary , Main Exam and Interview, Study Mat, Mock Test, Guided by WBCS Gr A Officers , Online and Classroom, Call 9674493673, or mail us at – mailus@wbcsmadeeasy.in
Visit our you tube channel WBCSMadeEasy™ You tube Channel
Please subscribe here to get all future updates on this post/page/category/website