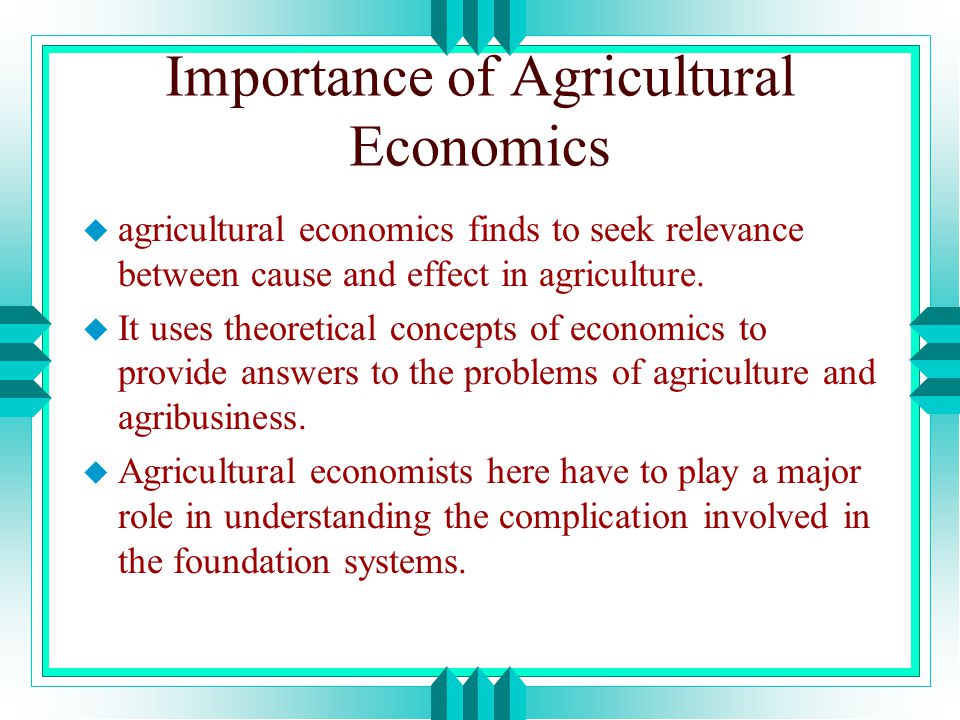 Agricultural economics, study of the allocation, distribution, and utilization of the resources used, along with the commodities produced, by farming. Agricultural economics plays a role in the economics of development, for a continuous level of farm surplus is one of the wellsprings of technological and commercial growth.Continue Reading Agro-economics – Agriculture Notes – For W.B.C.S. Examination.

As a country develops economically, the relative importance of agriculture declines. The primary reason for that was shown by the 19th-century German statistician Ernst Engel, who discovered that as incomes increase, the proportion of income spent on food declines. For example, if a family’s income were to increase by 100 percent, the amount it would spend on food might increase by 60 percent; if formerly its expenditures on food had been 50 percent of its budget, after the increase they would amount to only 40 percent of its budget. It follows that as incomes increase, a smaller fraction of the total resources of society is required to produce the amount of food demanded by the population.

That fact would have surprised most economists of the early 19th century, who feared that the limited supply of land in the populated areas of Europe would determine the continent’s ability to feed its growing population. Their fear was based on the so-called law of diminishing returns: that under given conditions an increase in the amount of labour and capital applied to a fixed amount of land results in a less-than-proportional increase in the output of food. That principle is a valid one, but what the classical economists could not foresee was the extent to which the state of the arts and the methods of production would change. Some of the changes occurred in agriculture; others occurred in other sectors of the economy but had a major effect on the supply of food.In looking back upon the history of the more developed countries, one can see that agriculture has played an important part in the process of their enrichment. For one thing, if development is to occur, agriculture must be able to produce a surplus of food to maintain the growing nonagricultural labour force. Since food is more essential for life than are the services provided by merchants or bankers or factories, an economy cannot shift to such activities unless food is available for barter or sale in sufficient quantities to support those engaged in them. Unless food can be obtained through international trade, a country does not normally develop industrially until its farm areas can supply its towns with food in exchange for the products of their factories.

Economic development also requires a growing labour force. In an agricultural country most of the workers needed must come from the rural population. Thus agriculture must not only supply a surplus of food for the towns, but it must also be able to produce the increased amount of food with a relatively smaller labour force. It may do so by substituting animal power for human power or by gradually introducing labour-saving machinery.

Agriculture may also be a source of the capital needed for industrial development to the extent that it provides a surplus that may be converted into the funds needed to purchase industrial equipment or to build roads and provide public services.

For those reasons, a country seeking to develop its economy may be well advised to give a significant priority to agriculture. Experience in the developing countries has shown that agriculture can be made much more productive with the proper investment in irrigation systems, research, fertilizers, insecticides, and herbicides.

Fortunately, many advances in applied science do not require massive amounts of capital, although it may be necessary to expand marketing and transportation facilities so that farm output can be brought to the entire population.