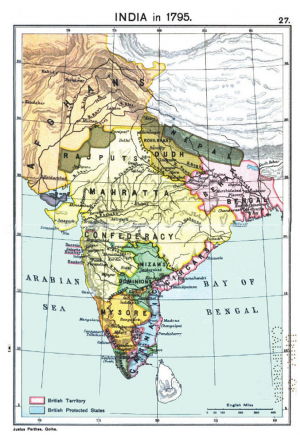 Mysore empire has rivalry with Marathas and Nizams of Hyderabad.

British already had Bengal in East and Carnatic region in South and they wanted to join by capturing Northern Circars (Chicacole, Srikakulam, Rajamundry, Ellore, Kondapalli and Guntur)

So, there was a plot to attack on Haidar Ali’s Mysore by the combined Maratha, Hyderabad Nizam and British force.

There was a mis co-ordination among the alliance team and Marathas attacked first, Haidar Ali diplomatically brought peace by giving them a large sum of money and some Northern territories.

Haidar offered Nizam to attack on Nawab of Arcot(Carnatic region) as they were common enemies of him and decided to share territories after win. This diplomatic way he neutralized Nizam.

Now, in this a year-and-a-half non-conclusive war, he suddenly appeared in the gate of Fort. St. George,Madras to capture Madras and forced EIC to sign Treaty of Madras on April 4, 1769.

The treaty provided for the exchange of prisoners and the conquered areas.

Haidar Ali was promised the help of the English in case he was attacked by any other power.

The British failed to adhere to the treaty of Madras when Mysore was attacked by the Maratha army in 1771, He again gave a huge maount of money and settled with Marathas.

The British even tried to capture Mahe port which was under Haider Ali’s protection.

Haider Ali found the French more resourceful in terms of fulfilling the army requirements of guns, saltpetre and lead.

Haidar Ali forged an alliance with the Marathas and the Nizam against the British.
He attacked the Carnatic and captured Arcot and defeated the English army under Colonel Baillie in 1781.

English (under Sir Eyre Coote) detached both the Marathas and the Nizam from Haidar’s side and defeated Haidar at Porto Novo (present day Parangipettai, Tamil Nadu) in November 1781.

he regrouped his forces and defeated the English, suddenly Haidar died of cancer on December 7, 1782.

His son Tipu Sultan carried on the war for one year and Fed up with an inconclusive war, both sides opted for peace, negotiating the Treaty of Mangalore (March, 1784) under which both the parties gave back the territories they had taken from each other.

The Treaty of Mangalore was not enough to resolve the conflicts between Tipu Sultan and the British.Both were aiming to establish their own political supremacy over the Deccan.

The Third Anglo-Mysore War began when Tipu attacked Travancore, an ally of the English and the only source of pepper for the East India Company.

Travancore had purchased Jalkottal and Cannanore from the Dutch in the Cochin state which was a feudatory of Tipu, he considered the act of Travancore as a violation of his sovereign rights.

he British sided with Travancore and attacked Mysore.
The Nizam and the Marathas who were jealous of Tipu’s growing power joined the British.

In 1790, Tipu Sultan defeated the British army under General Meadows.

In 1791, Lord Cornwallis took the leadership and at the head of a large army marched through Ambur and Vellore to Bangalore (captured in March 1791) and from there to Seringapatam.

The war was concluded with defeat of Tipu and the Treaty of Seringapatam, 1792

Under this treaty, nearly half of the Mysorean territory was taken over by the alliance of the British, Nizam and the Marathas.

Half of the war indemnity was to be paid immediately while the rest was to be given in installments, for which Tipu’s two sons were taken as hostages by the English.
Fourth Anglo Mysore War (1799)

Tipu fulfilled all the terms of the Treaty of Seringapatam and got his sons released.

In 1796, when the Hindu ruler of the Wodeyar dynasty died, Tipu declared himself as the Sultan and decided to avenge his humiliating defeat in the previous war.

n 1798, Lord Wellesley, Governor General of Bengal being concerned with Tipu’s growing friendship with the French, forced Tipu into submission of Subsidiary Alliance.

Tipu was accused of plotting against the British by sending emissaries to Arabia, Afghanistan and to the Isle of France (Mauritius) and Versailles, with treasonable intent. Tipu’s explanation did not satisfy Wellesley thus the fourth Anglo-Mysore war began.

The war began on April 17, 1799 and ended on May 4, 1799 with the fall of Seringapatam. Tipu died in the war and all his treasures were confiscated by the British

The new state of Mysore was handed over to the old Hindu dynasty (Wodeyars) under a minor ruler Krishnaraja III, who accepted the subsidiary alliance.

It had taken the English 32 years to subjugate Mysore. The threat of French revival in the Deccan was permanently eliminated.

2) Who among the following was associated with the French? (Preli 2018)

4) The capital of Tipu Sultan was at

7) Arrange the following events related to Anglo-Mysore War in the proper chronological order and choose the correct answer from the codes given below: (Mains 2018)

(i) Battle of Porto Novo

8) From which of the following countries did Tipu Sultan seek help to expel the British from India? (Mains 2017)

(D) All of the above

9) Which of the following statements about Tipu Sultan is not correct ? (Mains 2016)

(A) His reign represented a discontinuity in 18th Century Indian politics, as his kingship was rooted firmly in a strong regional tradition.

(B) In a symbolic gesture to proclaim his independence, he issued coins without any reference to the Mughal emperior.

(C) Instead of emperor Shah Alam’s name he inserted his own name in the Khutba (Friday prayers at the Mosque’s).

(D) He never sought a sanad from the Ottoman Khalifa to legitimise his rule.

Download WBCS MADE EASY App from this link http://on-app.in/app/rrnvu