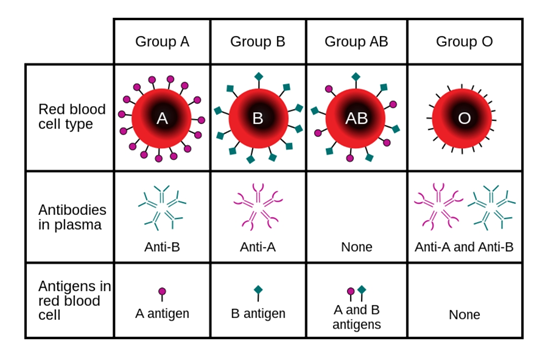 In biology, transport is a life process in which a material absorbed (or made) in one part of the body of an organism is carried to other parts in its body. This point will become clear from the following discussion.

We can now say that: All the living organisms (animals and plants) need a transport system to supply them with food, water and oxygen, and to carry away the harmful waste materials produced in their bodies.

What is closed circulation?

When blood is always confined within heart and blood vessels. Eg.,- Most of the higher animals.

What is open circulation?

ABO grouping is based on the presence or absence of two surface antigens (chemicals that can induce immune response) on the RBCs namely A and B.

Bombay blood group, is a rare blood type. This blood phenotype was first discovered in Bombay, now known as Mumbai, in India, by Dr. Y. M. Bhende in 1952. It is mostly found in South Asia (India, Bangladesh, Pakistan) and parts of Middle East such as Iran.

Another antigen, the Rh antigen is also observed on the surface of RBCs of majority (nearly 80 85 percent) of humans.

Erythroblastosis fetalis is hemolytic anemia in the fetus (or neonate, as erythroblastosis neonatorum) caused by transplacental transmission of maternal antibodies to fetal red blood cells. The disorder usually results from incompatibility between maternal and fetal blood groups, often Rho(D) antigens.

In blood circulatory system, the blood flows through three types of blood vessels:

(i) arteries, (further division – arterioles) (artery carries blood from the heart to the body organs)

(ii) veins, (further division – venules) (vein carries blood from the body organs back to the heart)

The heart is roughly triangular in shape.

It is made of special muscle called cardiac muscle.

The size of our heart is about the same as our ‘clenched fist’.

In humans, the heart is located between the lungs, middle compartment of the chest but it is slightly tilled towards left.

The Heart is a muscular organ in most animals, which pumps blood through the blood vessels of the circulatory system.

The heart beats non-stop all the time.

The heart beat is due to the rhythmic contraction and relaxation of the heart muscles which make up the atria and the ventricles.

The blood circulatory system in human beings is an example of double circulation.

One complete contraction and relaxation of the heart is called a heartbeat.

In cardiovascular physiology, stroke volume (SV) is the volume of blood pumped from the left ventricle per beat.

The term stroke volume can apply to each of the two ventricles of the heart, although it usually refers to the left ventricle. The stroke volumes for each ventricle are generally equal, both being approximately 70 mL in a healthy 70-kg man.

The normal blood pressure values are:

The blood pressure values vary from person to person and from time to time. They also vary with age For example, a young person may have blood pressure of 110/75 but at the age of 60 years it could be 145/90. High blood pressure is called hypertension.

High blood pressure is caused by the constriction (narrowing) of very small arteries (called arterioles) which results in increased resistance to blood flow.. Very high blood pressure can lead to rupture of an artery and internal bleeding.

Download WBCS MADE EASY App from this link http://on-app.in/app/rrnvu