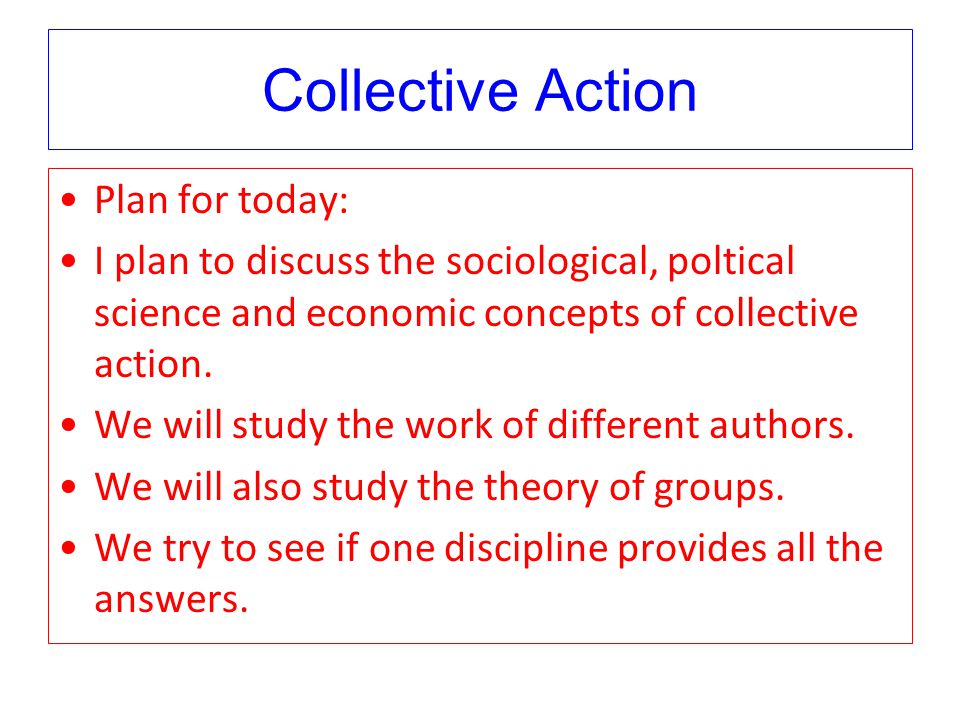 Peaceful protests, awareness-raising, and grass-roots campaigns are all forms of political action. Minorities and members of oppressed communities engage in these acts to get their messages out and call attention to their struggles. These acts are what is called collective action. The Civil Rights Movement of the 1950s and 1960s in the United States is a great example of collective action.Continue Reading Collective Action – Sociology Notes – For W.B.C.S. Examination.

Collective action is any form of organized social or political act carried about by a group of people in order to address their needs. Collective action is a subject of interest to people working in a variety of different disciplines, such as sociology, social psychology, and economics. Though the Civil Rights Movement in the United States is perhaps the most visible example of collective action, it certainly isn’t the only one. Virtually any form of organized group effort to address some form of inequality may be considered collective action. Many of the examples are struggles for equal rights, such as women’s suffrage or the struggle for gay and lesbian rights. Other opportunities for collective action include issues like a community of farmers coming together to agree upon how to best ration water from a common source. Labor unions are another type of collective action, ensuring that business leaders pay a fair wage and provide adequate benefits to their employees.

In 1965, Mancur Olson, Jr. published the first major text on the study of collective action, The Logic of Collective Action. Olson’s theories are still reflected in the theories of many economists to this day, especially issues with public goods and free riders. Public goods are things that are available for the use of everyone, regardless of those people’s investment. The concept of free riding is the use of public goods by people uninvolved in the process of making them available.

Olson’s book was one of the first to suggest that people may be encouraged to free ride, thus introducing one of the classical problems with collective action. Another concept Olson suggested was that minorities could compel the majority to give into their interests in a democracy. The majority often fails to act to change the status quo because of poor incentives. The minority is strongly motivated to act because incentives for them are stronger. Both of these concepts broke with the conventional wisdom of the day. It used to be assumed that people always acted on their own interests, and that the majority always ruled over the minority in a democracy.

In the social sciences, Martijn van Zomeren, Tom Postmes, and Russell Spears conducted a study of previous research on collective action in 2008. The terms of the study concerned a social identity model of collective action (SIMCA), with three key concepts examined through the literature. These three concepts were perceived injustice, efficacy, and identity.

Injustice is how fairly or unfairly individuals feel their group is being treated by institutions. Efficacy examines whether or not people feel they can bring about change. Identity, specifically social identity, examines how strongly people believe they belong to a defined group. In SIMCA, the strongest force among the three was identity, which often led to stronger senses of efficacy and injustice. All three were related strongly enough statistically that they seemed to predict further social action.