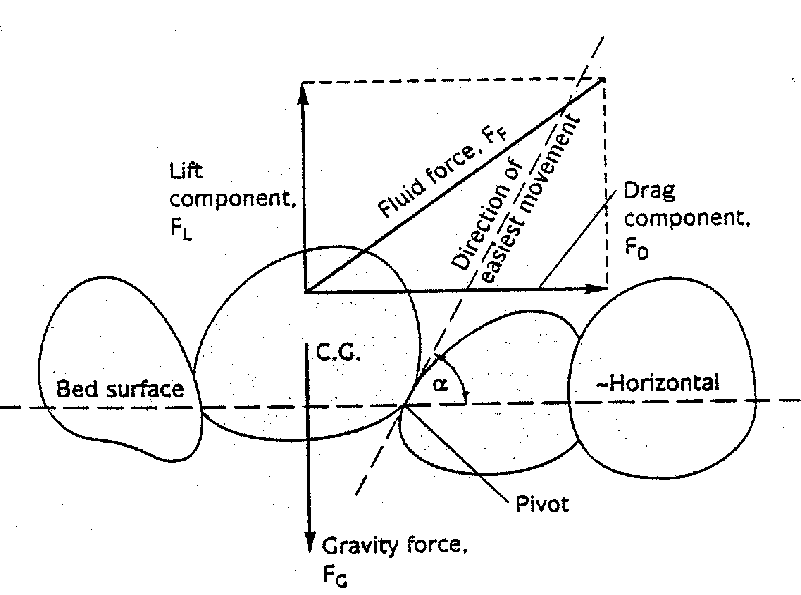 The main force reponsible for entrainment is fluid drag. The strength of fluid drag varies with the mass of the eroding medium (water is 9000 times more dense than air) and its velocity. Fluid drag causes the particle to move because of horizontal force and vertical lift.Continue Reading Entrainment Forces – General Science Notes – For W.B.C.S. Examination.

Within a medium of erosion, both of these forces are controlled by velocity. Horizontal force occurs from the push of the agent against the particle. If this push is sufficient to overcome friction and the resistance of cohesive bonds, the particle moves horizontally.

The vertical lift is produced by turbulence or eddies within the flow that push the particle upward. Once the particle is lifted the only force resisting its transport is gravity as the forces of friction, slope angle, and cohesion are now non-existent. The particle can also be transported at velocities lower than the entrainment velocities because of the reduction in forces acting on it.

Many hydrologists and geomorphologists require a mathematical model to predict levels of entrainment, especially in stream environments. In these highly generalized models, the level of particle entrainment is relative to particle size and the velocity of the medium of erosion. These quantitative models can be represented graphically. On these graphs, the x-axis represents the log of particle diameter, and the y-axis the log of velocity. The relationship between these two variables to the entrainment of particles is described by a curve, and not by a straight line.

Once a particle is entrained, it tends to move as long as the velocity of the medium is high enough to transport the particle horizontally. Within the medium, transport can occur in four different ways:

Particle weight, size, shape, surface configuration, and medium type are the main factors that determine which of these processes operate.

The erosional transport of material through the landscape is rarely continuous. Instead, we find that particles may undergo repeated cycles of entrainment, transport, and deposition. Transport depends on an appropriate balance of forces within the transporting medium. A reduction in the velocity of the medium, or an increase in the resistance of the particles may upset this balance and cause deposition. Reductions in competence can occur in a variety of ways. Velocity can be reduced locally by the sheltering effect of large rocks, hills, stands of vegetation or other obstructions. Normally, competence changes occur because of large scale reductions in the velocity of flowing medium. For wind, reductions in velocity can be related to variations in spatial heating and cooling which create pressure gradients and wind. In water, lower velocities can be caused by reductions in discharge or a change in the grade of the stream. Glacial flows of ice can become slower if precipitation input is reduced or when the ice encounters melting. Deposition can also be caused by particle precipitation and flocculation. Both of these processes are active only in water. Precipitation is a process where dissolved ions become solid because of changes in the temperature or chemistry of the water. Flocculation is a chemical process where salt causes the aggregation of minute clay particles into larger masses that are too heavy to remain suspended.