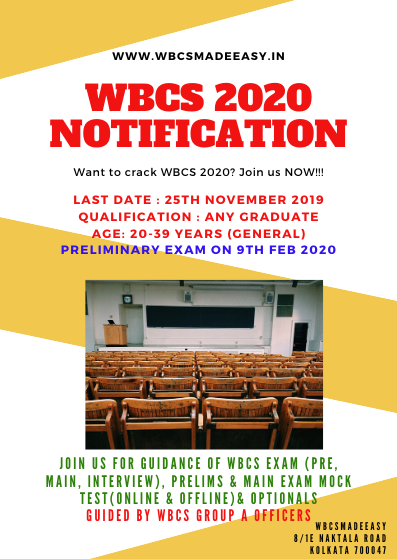 Essay Composition On – Changes That Will Change India – For W.B.C.S. Examination.

Change is a characteristic of all societies – be they primitive or modern. No society ever remains changeless. It is a different matter whether societies change slowly or experience revolu­tionary changes. A society going through revolutionary changes may lose its earlier identity because of the replacement of a large number of structures. Its merger with another society may make it a subsystem.Continue Reading Essay Composition On – Changes That Will Change India – For W.B.C.S. Examination.

A society may perish due to some catastrophe. Prehistoric investigations have brought to the surface evidence of several such human societies that flourished in the past, but have now become extinct. In India, we have instances of Mohen-jo-Daro and Harappa, cultures which once flourished, but are now extinct.

At times, the inhabitants of a given settlement may abandon it altogether for one reason or the other and settle elsewhere. In due course of time, such settlements are covered by sand and become mounds. They may be discovered later. But that will be an example of a dead society.

To an extent, a living human society can be compared with an organism. Like an organism, a society also grows. In the process, it begins to look different, but its identity is not lost. A society either enlarges or gets smaller, changes its demographic contours, or even its geographic boundaries, but these changes do not alter its identity.

A living society continually changes in response to developments in the natural and social environment, and also through the behavior of its members. When foreigners described India as a ‘traditional’ society, they implied that it was a society that stuck to its traditions and refused to change. But this is only a partial truth. Resisting a particular change, which has been brought about from the outside, does not mean that a society refuses to change.

All societies have their cultural monitors to screen all entries and take adequate measures to receive or reject them. Similarly, all societies put restrictions at their exit points, to allow or retain departures. These are called a society’s apertures and insulators. Any living culture has a mix of tradition and modernity. Tradition represents continuity; modernity designates change, or recency of arrival.

In the midst of the rapid changes brought about by revolution in information technology and the growing globalization, enormous social transformation is occurring in all societies. India is no exception. When India became independent, it became a union with the merger of several princely states that had a special relationship with British India, but it also lost some of its territory and a sizeable population. Both the geographical boundaries and the demographic contours of India were radically affected by the fact of partition.

Independent India also saw the reorganization of the states, incorporation of the Portuguese ruled Goa, Diu, and Daman, and the joining of Sikkim through a referendum. The resettlement of the refugees that came from the then Western and Eastern wings of Pakistan changed the demography and affected the economy of the places where they were rehabilitated.

The Sindhi population, which came from West Pakistan lost its land, but preserved its culture and language. These people now mainly inhabit places in Rajasthan, Gujarat, and Maharashtra. Sindhi is accorded the status of a recognized language in the Indian Consti­tution.

The geographical province of Sindh is in Pakistan, but the Sindhi subculture is alive and flourishing amongst the erstwhile migrants and their descendants settled in the places where they were relocated. Of course, interactions with local cultures have changed their profiles into new ‘sandwich cultures’.