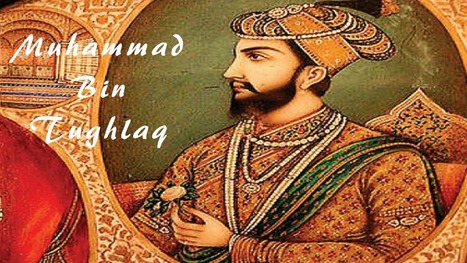 Muḥammad Bin Tughlaq, (born c. 1290, Delhi, India —died March 20, 1351, Sonda, Sindh [now in Pakistan] ), second sultan of the Tughluq dynasty (reigned 1325–51), who briefly extended the rule of the Delhi sultanate of northern India over most of the subcontinent. As a result of misguided administrative actions and unexampled severity toward his opponents, he eventually lost his authority in the south; at the end of his reign, the sultanate had begun to decline in power.Continue Reading History Notes On – Muhammad Bin Tughlaq – For W.B.C.S. Examination.

Muḥammad was the son of the sultan Ghiyāth al-Dīn Tughluq. Very little is known of his childhood, but he apparently received a good education. He possessed an encyclopaedic knowledge of the Qurʾān, Muslim jurisprudence, astronomy, logic, philosophy, medicine, and rhetoric. In 1321–22 his father sent him against the city of Warangal in the Deccan, in which campaign, after initial reverses, he subdued the rebellious Hindu rajas. From his accession to the throne in 1325 until his death in 1351, Muḥammad contended with 22 rebellions, pursuing his policies consistently and ruthlessly. Ziyāʾ al-Dīn Baranī, his close companion and counsellor for 17 years, often advised him to abdicate, but Muḥammad disdainfully rejected his advice.

As his reign began, Muḥammad attempted, without much success, to enlist the services of the ʿulamāʾ, the Muslim divines, and the Sufis, the ascetic mystics. Failing to win the ʿulamāʾ over, he tried to curtail their powers, as some of his predecessors had, by placing them on an equal footing with other citizens. The Sultan wanted to use the Sufis’ prestigious position to stabilize his authority as ruler. Yet they had always refused any association with government and would not accept any grants or offices except under duress. Muḥammad tried every measure, conciliatory or coercive, to yoke them to his political wagon. Although he humiliated them, he could not break their opposition and succeeded only in dispersing them from the towns of northern India.

A projected Khorāsān expedition (1327–28) that never materialized was intended to secure more defensible frontiers in the west. The Karajil (Garhwal-Kumaon) expedition (1329–30), an attempt to adjust the boundary dispute with the northern hill states then dominated by China, ended in disaster, but it was followed by an exchange of emissaries between China and Delhi. The conquest of Nagarkot in the foothills of the Himalayas in northwestern India was based on Muḥammad’s policy of establishing secure frontiers.

Between 1328 and 1329 the Sultan increased the land tax in the Doab—the land between the Ganges (Ganga) and Yamuna rivers—but the taxpayers resisted it, especially because a severe drought coincided. Muḥammad was the first ruler to introduce rotation of crops, establish state farms, and tend cultivation and improve artificial irrigation by establishing a department of agriculture. When famine broke out in northern India (1338–40), he moved his residence to Swargdawari to supervise famine relief measures himself.

Muḥammad’s last expedition, against the rebel Ṭaghī, ended with his death at Sonda in Sindh in 1351. He died with a smile on his face and verses of his own composition on his lips. In the words of a contemporary, “the Sultan was rid of the people and the people of the Sultan.”