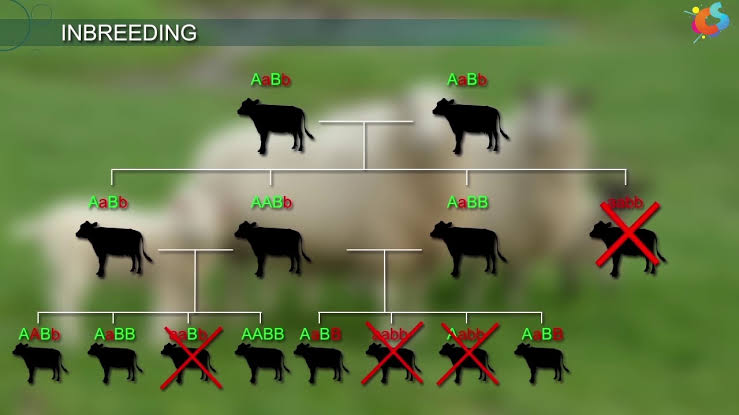 Agriculture as an optional subject is useful from numerous points of view. A decent hold over the subject helps you massively in taking care of the geography, economics, social issues in General Studies as the learning comes conveniently. Indeed, even essay paper, there is absolutely no less than one subject from Agriculture. Any W.B.C.S. aspirants who have scholarly foundation in Agriculture, Life Sciences, Botany, and other related fields can choose this subject as their optional. Paper I of agriculture is generic in nature where Paper- II is technical. Candidates with no prior knowledge of agriculture or Biology should not opt this subject as their optional for W.B.C.S. Mains Exam.Inbreeding, the mating of individuals or organisms that are closely related through common ancestry, as opposed to outbreeding, which is the mating of unrelated organisms. Inbreeding is useful in the retention of desirable characteristics or the elimination of undesirable ones, but it often results in decreased vigour, size, and fertility of the offspring because of the combined effect of harmful genes that were recessive in both parents.Continue Reading Inbreeding – Agriculture Notes – For W.B.C.S. Examination.

The closest type of inbreeding is selfing, or self-fertilization, the union of male and female sex cells produced by the same organism. Linebreeding is a form of inbreeding that involves selection of mates on the basis of their relationships to a certain superior ancestor. The backcross (crossing a first-generation hybrid with one of the parental types) is a common method of inbreeding.

Inbreeding forms a part of the breeding activities not only to breed parents with some degree of homozygosity for the production of hybrids but also breed materials homozygous for such desirable traits as disease resistance. Self-incompatibility makes inbreeding difficult or impossible. In cocoa, certain incompatible trees are encountered in a population, and in these plants selfing is possible. The selfing needs to be continued up to six to seven generations to attain homozygosity, and thereafter these plants can be utilized for crossing to exploit hybrid vigor. An inbreeding program has been in progress in the Kerala Agricultural University (Mallika et al., 2002a) since 1987.

Inbreeding polygyny is not unique to Scolytinae; regular brother/sister mating is found in a wide range of organisms, ranging from eyelash mites to naked mole rats, but it has evolved especially often in bark beetles. Extreme inbreeding has evolved eight times in Scolytinae, and is represented in nine different tribes (Table 3.3). About 27% of all described Scolytinae are thought to breed regularly by brother/sister mating. Of all inbreeding species, 97% come from two major species radiations. The largest inbreeding clade is that of 1336 species from 37 genera of Xyleborini plus three genera of inbreeding Dryocoetini, 22% of all Scolytinae (Tables 3.3 and 3.4, Appendix). This clade has been inbreeding regularly for about 20 million years (Jordal and Cognato, 2012). The second largest clade, the inbreeding Cryphalini, comprises 238 species divided among six genera. Its age is estimated to be ca. 50 million years (Jordal and Cognato, 2012). Despite the evolutionary success of the two major clades and ecological success of many inbreeding species, there is no evidence that inbreeding leads to diversification (Jordal and Cognato, 2012).To view Agricultire Syllabus , CLICK HERE.

Inbreeding, a regular phenomenon in the present-day hatcheries of India and most other Asian countries, occurs through repetitive breeding by maintaining a small founder population. This results in mating among closely related individuals, such as brother–sister and parent–offspring mating. Inbreeding is a cumulative phenomenon and in the course of successive generations it increases homozygosity by 50% and reduces heterozygosity by 50% in F1, 25% in F2, 12.5% in F3, and 6.25% in F4. Continuous inbreeding results in increased homozygosity and produces homozygous stocks of dominant or recessive genes and eliminates heterozygosity from the population. Table 5.1 indicates how a hypothetical population being 100% heterozygous (A a) at parental generation gradually reduced to 1/8th proportion in three generations out of inbreeding. Compared to other vertebrates, fish are more prone to inbreeding in hatchery environment a due to their high fecundity. For example, the species of Indian major carp can produce about 0.25 million eggs per female per breeding season. Fish breeders, to ensure a high rate of fertilization, hatching, and survivality, practice stripping in most cases. Again, it is evident now that multiple breeding and mixed spawning is a common practice in almost all the hatcheries of the Asian continent. The absence of a scientific brood stock management and development program creates a dire scarcity of brood stock during the breeding season. This led fish breeders, particularly the medium-sized, small, and marginal breeders to practice breeding with very small numbers of founder population, resulting in a high rate of inbreeding. The inbreeding rate in some of these hatcheries has been found to be between 2% and 17% (Eknath and Doyle, 1990).