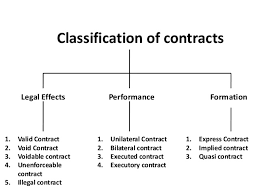 Law of contracts in India defines Contract as an agreement enforceable by law which offers personal rights, and imposes personal obligations, which the law protects and enforces against the parties to the agreement. The general law of contract is based on the conception, which the parties have, by an agreement, created legal rights and obligations, which are purely personal in their nature and are only enforceable by action against the party in default.Continue Reading Law Notes – For W.B.C.S. Examination – Law Of Contracts.

Section 2(h) of the Indian Contract Act, 1872[2] defines a contract as “An agreement enforceable by law”. The word ‘agreement’ has been defined in Section 2(e) of the Act as ‘every promise and every set of promises, forming consideration for each other’

Law of Contract and Contribution of Lord Denning:
Lord Denning was perhaps the greatest law-making judge of the century and the most controversial. His achievement was to shape the common law according to his own highly individual vision of society. Lord Denning was one of the most celebrated judges of his time. He is popular as a dissenting judge.

Validity & formation of a Contract:
According to legal scholar Sir John William Salmond, a contract is “an agreement creating and defining the obligations between two or more parties” For the formation of a contract the process of proposal or offer by one party and the acceptance thereof by the other is necessary. This generally involves the process of negotiation where the parties apply their minds make offer and acceptance and create a contract.

Standard Form Contracts:
The law of contract has in recent time to face a problem, which is assuming new dimensions. The problem has arisen out of the modern large scale and widespread practice of concluding contracts in standardized form. People upon whom such exemption clauses or standard form contracts are imposed hardly have any choice or alternative but to adhere. This gives a unique opportunity to the giant company to exploit the weakness of the individual by imposing upon him terms, which may go to the extent of exempting the company from all liability under contract. It is necessary and proper that their interests should be protected. The courts have therefore devised some rules to protect the interest of such persons

Post-Termination non-compete clauses in employment contracts:
Indian courts have consistently refused to enforce post-termination non-compete clauses in employment contracts, viewing them as “restraint of trade” impermissible under Section 27 of the Indian Contract Act, 1872 (the Act), and as void and against public policy because of their potential to deprive an individual of his or her fundamental right to earn a livelihood

Contract- II: Bailment:
Contracts of Bailment are a special class of contract. These are dealt within Chap. IX from S.148 to 181 of the Indian Contract Act, 1872. Bailment implies a sort of one person temporarily goes into the possession of another. The circumstance in which this happens are numerous. Delivering a cycle, watch or any other article for repair, delivering gold to a goldsmith for making ornaments, delivering garments to a drycleaner, delivering goods for carriage, etc. are all familiar situations which create the relationship of ‘Bailment’.

A Study of Contract Labour (Regulation and Abolition) Act, 1970:
Contract labourers also suffer from inferior labour status, casual nature of employment, lack of job security and poor economic conditions. It was also observed that in some cases the contract labourers did the same work as the workers directly employed by the industrialist but were no paid the same wages and the same working conditions. This practice of contract labour has also lead to the exploitation of these labourers as they are not employed directly under the employer. This practice of exploitation was and still is very much prevalent in India, therefore to encounter such problem and also to regulate the conditions of these labourers the Govt. passed an Act called the Contract Labour (Regulation and Abolition) Act, 1970..

Contract Labour:
Basic instinct. Hearing the concept of labour, what strikes the minds of the layman is the name sakingly clad men and women who work at construction sites, factories and alongside the roads, working in the scorching sun and pitiful conditions. Does it ever come to the minds of the general public that these labourers have a huge set of laws governing and safeguarding their rights ? yes. Probably some of us do know about labour laws. Ever given a second thought about the implementation of these laws and regulations which are painstakingly formulated? Not that they are not followed at all but come on! We’re aware of the scene here in our country

E-Contracts:
It’s an undisputed fact that E-Commerce has become a part of our daily life. One such justification for the popularization of E-Commerce would be immoderate technological advancement. E-Commerce, as the name suggests, is the practice of buying and selling goods and services through online consumer services on the internet. The ‘e’ used before the word ‘commerce’ is a shortened form of ‘electronic’. The effectiveness of E-Commerce is based on electronically made contracts known as E-Contracts. Although E-Contracts are legalized by Information Technology Act but still majority feels insecure while dealing online. The reason being lack of transparency in the terms & conditions attached to the contract and the jurisdiction in case of a dispute that may arise during the pendency of a transaction with an offshore site

Regulation of Contract Labour:
Contract Labour is one of the acute form of unorganized labour. Under the system of contract labour workers may be employed through contractor on the contract basis. Workmen shall be deemed to be employed as contract labour or in connection with the work of an establishment when he is hired in or in connection with such work by or through a contractor, with or without the knowledge of the principal employer. In this class of labour the contractors hire men (contract labour) who do the work on the premises of the employer, known as the principal employer but are not deemed to be the employees of the principal employer. The range of tasks performed by such contract workers varies from security to sweeping and catering and is steadily increasing. It has been felt, and rightly too, that the execution of a work on contract through a contractor who deployed the contract labour was to deprive the labour of its due wages and privileges of labour class.