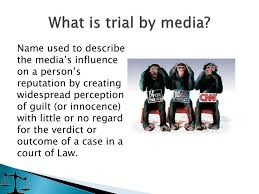 Law Notes On – Trial By Media – For W.B.C.S. Examination.

against a community or individual. Crime is known to be “an action or

and is punishable by law”.Continue Reading Law Notes On – Trial By

rights of a community at large. Acts of crime are punishable upon proof of

guilt that are presented in the court of law. Consequently, criminal law is

subsequent punishments. These criminal laws are enforced through

criminal procedures and trials. These trials however, can be influenced,

corrected, and sometimes even regulated by the media.

Early research conducted by the Payne Fund studies found that the mass
media had a powerful effect over its audience, which lead to the more
recent ‘trial by media’ debate. ‘Trial by Media’ essentially
translates as media bias. The Sun Newspaper’s switch from Conservative
to Labour just before the general election in 1997, and Labour’s
subsequent win, arguably demonstrates evidence of the powerful effect
of bias within the media. (Jones M., Jones E. Mass Media 1998 p190) In
the case of Jamie Bulger, murdered by two young boys in 1993, blame
was attributed to the media for the 18-certificate horror ‘Childs
Play3′ production, from which the boys were said to have ‘re-enacted’
some scenes. (Jones p76) The many studies into media effects on
audiences have raised some valid arguments and theories. Belief as to
who has more effect over media content (and bias of content) is
divided into hegemonic Marxist theory (dominated by elite ideology)
versus the pluralist approach (public autonomy). Debate into audience
reception of media output falls into several different schools of
thought; reception analysis theory, deviancy amplification and moral
panic, and the argument over whether the media encourages violence.