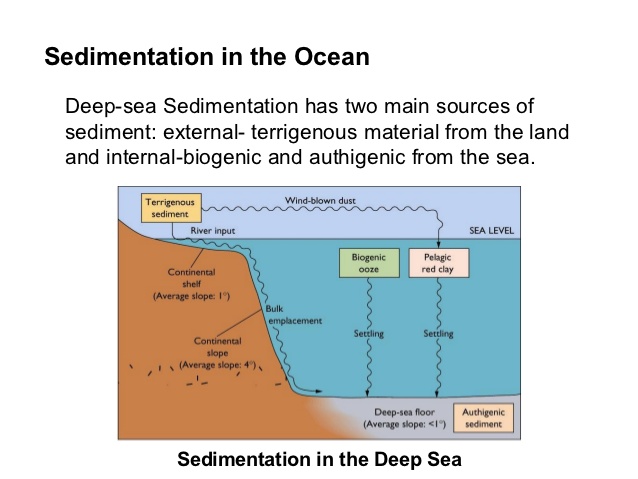 Marine sediment, any deposit of insoluble material, primarily rock and soil particles, transported from land areas to the ocean by wind, ice, and rivers, as well as the remains of marine organisms, products of submarine volcanism, chemical precipitates from seawater, and materials from outer space (e.g., meteorites) that accumulate on the seafloor.Continue Reading Marine sediments – Geography Notes – For W.B.C.S. Examination.

Although systematic study of deep-ocean sediments began with the HMS Challenger expeditions between 1872 and 1876, intensive research was not undertaken until nearly 100 years later. Since 1968 American scientists, in collaboration with those from the United Kingdom, the Soviet Union, and various other countries, have recovered numerous sedimentary core samples from the Atlantic and Pacific oceans through the use of a specially instrumented deep-sea drilling vessel called the Glomar Challenger.

Marine sediments deposited near continents cover approximately 25 percent of the seafloor, but they probably account for roughly 90 percent by volume of all sediment deposits. Submarine canyons constitute the main route for sediment movement from continental shelves and slopes onto the deep seafloor. In most cases, an earthquake triggers a massive slumping and stirring of sedimentary material at the canyon head. Mixed with seawater, a dense liquid mass forms, giving rise to a density current that flows down the canyon at speeds of several tens of kilometres per hour. After reaching the base of the continental slope, the sediment-laden mass moves out onto the continental rise at the base of the slope. Deposits from turbidity currents (i.e., short-lived density currents caused by suspended sediment concentrations) can build outward for hundreds and sometimes thousands of kilometres across the ocean bottom. Large sediment-built plains commonly occur in the Atlantic Ocean, where turbidity currents flow from the base of a continent to the Mid-Atlantic Ridge.

Deposits produced by turbidity currents are called turbidites. Most of them consist of sands and silts, but a few are composed of gravels. Turbidites tend to have distinct boundaries between adjacent units. Each of these units is formed by a separate flow and often exhibits a systematic change in grain size from coarsest at the bottom to finest at the top. Turbidites characteristically contain the remains of shallow-water organisms mixed with deep-water varieties. The shallow-water organisms came from areas where the density current originated, whereas the deep-water forms existed in the area traversed by the current or where it finally deposited its load.

The sediments deposited on continental shelves and rises, frequently referred to as hemipelagic sediments, ordinarily accumulate too rapidly to react chemically with seawater. In most cases, individual grains thus retain characteristics imparted to them in the area where they formed. As a rule, sediments deposited near coral reefs in shallow tropical waters contain abundant carbonate material. Calcareous, reef-derived muds, for example, occur around atolls at the northwestern end of the Hawaiian Island chain. Near volcanoes, sediments contain ash—e.g., silicate glass and fine volcanic-rock fragments.

Roughly 75 percent of the deep seafloor is covered by slowly accumulating deposits known as pelagic sediments. Because of its great distance from the continents, the abyssal plain does not receive turbidity currents and their associated coarse-grained sediments. Moreover, since relatively little land-derived sediment consisting of silicate mineral and rock fragments reach the ocean bottom, deposits there show a predominance of biogenic constituents (i.e., the skeletal remains of marine organisms). In areas where surface waters are fertile, opal from diatoms (algae) and radiolarians (protozoans) and calcium carbonate from such organisms as foraminiferans, coccolithophorids, and pteropods are supplied to the sediment. If the biological constituents exceed 30 percent by volume, then the deep-ocean sediments are usually classified on the basis of their biogenic components. For example, a mud containing 30 percent by volume of foraminiferal tests (external hard parts) is called a foraminiferal mud or ooze. When one genus dominates, it is frequently referred to by the generic name, such as Globigerina ooze. Diatomaceous and radiolarian muds are named on the same basis. Where biogenic constituents compose less than 30 percent of the total, the deposit is called a deep-sea clay, brown mud, or red clay.