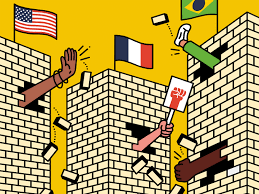 Nationalism means the spirit of devotion to the nation, which must permeate the hearts and minds of every citizen of the country. This is the reason why national anthem is played in educational institutions, and now even in cinema halls before the start of the movies, and the curriculum is enriched with the life stories about the nation’s great sons, heroes and the freedom fighters.Continue Reading Nationalism Debate – Essay Composition For – W.B.C.S. Examination.

Nationalism is the feeling which gives courage and strength to the soldiers to guard the borders of their country. If the citizens stand united despite being the followers of different religions, speaking different languages, and practicing diverse cultures of their regions, no internal or external threat can harm their country. India is a prominent example of this all-pervasive sense of nationalism that has always served the nation well.

Nationalism is a concept according to which the nation is considered to be supreme – deserving the highest priority. Nationalism is an ideology that promotes the shared identity of the citizens of any country. For a nation’s progress and prosperity, it is imperative that its citizens rise above their regional identities and strengthen the sense of pride in their nation.

There are many countries, including India which are culturally, religiously and linguistically diverse and in these countries the sense of nationalism helps achieve unity in diversity. For the development of India, it is imperative that its citizens work together despite being different in their thoughts and ideas and it can be made possible only through developing a sense of nationalism among them.

Indians have a deep sense of nationalism and this is the reason why they always stand untied when it comes to respecting and honouring their national flag, national anthem and national symbols, which all leads towards preservation of the unity and integrity of the country.

Nationalism means rising about narrow identities of caste, religion and regions to feel a deep sense of pride in our nation. Lord Ram rightly told brother Lakshman after defeating Ravan that the famed golden city of Lanka hardly appeals to him  as Janani janmabhoomischa swargadapi gariyasi (Mother and motherland are superior to heaven).

Our country does not practice any sense of discrimination to any citizen as they enjoy all rights and privileges. It is the duty of all of us to foster the unity and integrity of India by a sense of nationalism that transcends all barriers of region, religion and language.

It was this overriding spirit of nationalism that won India freedom from the British after years of hard struggle and innumerable sacrifices. At that time India was divided into several princely states but it stood as one nation in the struggle for freedom. We have to preserve and protect this freedom as even seven decades after independence; there are threats to national security and unity from the separatist and secessionist forces within and outside India. Only a deep-rooted feeling of nationalism can save India from any further division in the name of right to self-determination in Kashmir or insurgent movements in North-East India.