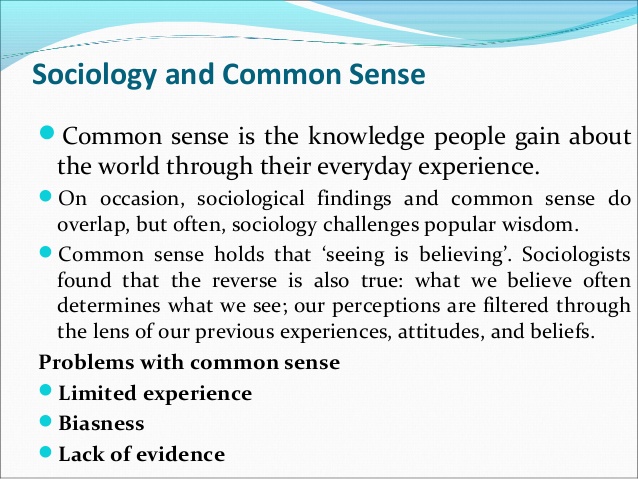 Sociology Notes On – Sociology And Common Sense – For W.B.C.S. Examination.

Sociology is a social science that enables people to understand the structure and dynamics of society. By using a scientific approach, and by critically analysing society using qualitative and quantitative methods, sociologists can find patterns and connections within human behaviour to provide explanations of how society affects people. Sociological views are based on theories that have been tested through unbiased research and attempt to take all values into account.Continue Reading Sociology Notes On – Sociology And Common Sense – For W.B.C.S. Examination.

Common sense theories are generally individualistic and naturalistic assumptions that are based on opinions than can vary depending on an individuals class or cultural background. During this essay I will aim to provide examples of the differences between the sociological viewpoint, and the common sense viewpoint of human behaviour, using theories of some renowned sociologists.

In 1959, American sociologist Charles Wright Mills wrote his influential book ‘The Sociological Imagination’. In the book, Mills proposed that possibly the most assistive part of his sociological imagination theory was differentiating problems within society between ‘personal troubles of the milieux’ and ‘public issues of social structure’. In his view, ‘personal troubles’ were individualistic and where ‘an individual’s character and with those limited areas of social life of which he is directly and personally aware’. By contrast, his thoughts on ‘public issues’ were that they were more general problems, out with the scope of an individual, and would affect more than just one person. He used the example of unemployment to explain his sociological viewpoint further.

Humans were not made to be solitary creatures; although there are introverts, extraverts, and we all enjoy some alone time we also crave both physical and mental stimulation from others. In the book we are given an example about a boy who decided to sail alone around the world and stated that he learned a lot about people by doing so. He was able to take the time alone and reflect upon his relationships with others as well as feeling what being in solitude for long amounts of time do to someone. Proof that we are solitary creatures can also be seen in prisons. Prisons are largely social places where there are different groups, hierarchies, and codes; still a major punishment in prison is to be put in solitary confinement. I also enjoyed within the book that they stated the social world is not only something that exists outside of us but it is also something that we carry within us. Even in our alone time we keep a running dialogue in our heads, or a stream of consciousness. We also use alone time to reflect upon our interactions with others and maybe even create different social scenarios and experiment with how we might react.