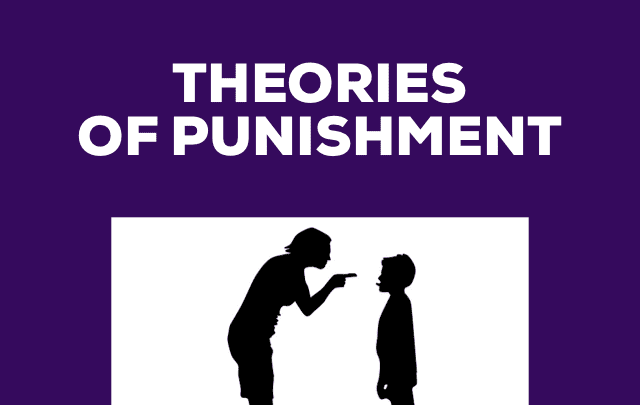 Each society has its own way of social control for which it frames certain laws and also mentions the sanctions with them. These sanctions are nothing but the punishments.Continue Reading Theories Of Punishment – Philosophy Notes – For W.B.C.S. Examination.

‘The first thing to mention in relation to the definition of punishment is the ineffectiveness of definitional barriers aimed to show that one or other of the proposed justifications of punishments either logically include or logically excluded by definition.’ Punishment has the following features:
# It involves the deprivation of certain normally recognized rights, or other measures considered unpleasant
# It is consequence of an offence
# It is applied against the author of the offence
# It s applied by an organ of the system that made the act an offence.

The kinds of punishment given are surely influenced by the kind of society one lives in. Though during ancient period of history punishment was more severe as fear was taken as the prime instrument in preventing crime. But with change in time and development of human mind the punishment theories have become more tolerant to these criminals. Debunking the stringent theories of punishment the modern society is seen in loosening its hold on the criminals. The present scenario also witnesses the opposition of capital punishment as inhumane, though it was a major form of punishing the criminals earlier. But it may also be observed till recently the TALIBANS used quite a harsh method for suppression. The law says that it does not really punish the individual but punishes the guilty mind.

As punishment generally is provided in Criminal Law it becomes imperative on our part to know what crime or an offence really is. Here the researcher would like to quote Salmond’s definition of crime: Crime is an act deemed by law to be harmful for the society as a whole though its immediate victim may be an individual. He further substantiates his point of view through the following illustration a murderer injures primarily a particular victim, but its blatant disregard of human life puts it beyond a mater of mere compensation between the murderer and the victim’s family.

Many a time this punishment has been termed as a mode of social protection. The affinity of punishment with many other measures involving deprivation by the state morally recognized rights is generally evident. The justifiability of these measures in particular cases may well be controversial, but it is hardly under fire. The attempt to give punishment the same justification for punishment as for other compulsory measures imposed by the state does not necessarily involve a particular standpoint on the issues of deterrence, reform or physical incapacitation. Obviously the justification in terms of protection commits us to holding that punishment may be effective in preventing social harms through one of these methods.

As punishments generally punish the guilty mind it becomes very important on the part of the researcher to what crime really is. But it is quite difficult on the part of the researcher to say whether or not there must be any place for the traditional forms of punishment. In today’s world the major question that is raised by most of the penologist is that how far are present ‘humane’ methods of punishment like the reformative successful in their objective. It is observed that prisons have become a place for breeding criminals not as a place of reformation as it was meant.

It may be clearly said that the enactment of any law brings about two units in the society- the law-abiders and the law-breakers. It is purpose of these theories of punishment to by any means transform or change these law-breakers to the group of abiders. To understand the topic the researcher would like to bring about a valid relation between crime, punishment and the theories.
The researcher due to certain constraints of limited time and knowledge is unable to cove the area of the evolution of these theories separately but would include them in the second chapter. The researcher would now like to move on to his first chapter in which he would be vividly discussing ‘crime and punishment.’
The researcher in his first draft had included the chapter on the evolution of the theories from the early ages to the modern era, but due to certain limitations included them and discussed them during the due course of the project.