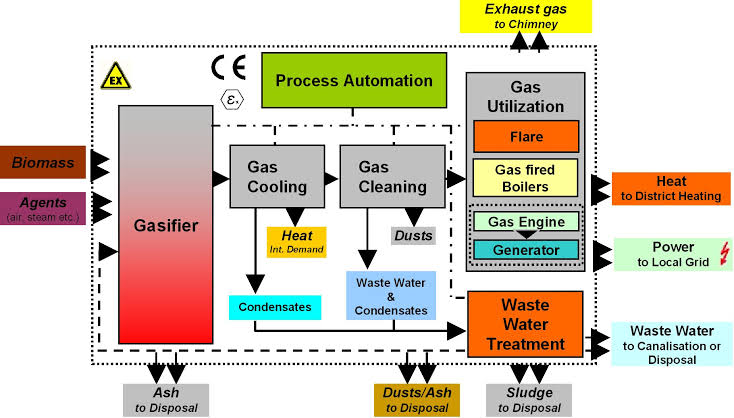 Amongst the vast syllabus of W.B.C.S Examination, this part is quite easy to read and recollect and also fetches good marks.Biological diversity, or biodiversity, is the scientific term for the variety of life on Earth. It refers not just to species but also to ecosystems and differences in genes within a single species. Biodiversity is the key indicator of the health of an ecosystem.Biomass gasification is a mature technology pathway that uses a controlled process involving heat, steam, and oxygen to convert biomass to hydrogen and other products, without combustion. Because growing biomass removes carbon dioxide from the atmosphere, the net carbon emissions of this method can be low, especially if coupled with carbon capture, utilization, and storage in the long term.Continue Reading W.B.C.S. Examination Notes On – Biomass Gasification – Environment.

Gasification plants for biofuels are being built and operated, and can provide best practices and lessons learned for hydrogen production. The U.S. Department of Energy anticipates that biomass gasification could be deployed in the near-term time frame.

Biomass, a renewable organic resource, includes agriculture crop residues (such as corn stover or wheat straw), forest residues, special crops grown specifically for energy use (such as switchgrass or willow trees), organic municipal solid waste, and animal wastes. This renewable resource can be used to produce hydrogen, along with other byproducts, by gasification.

Gasification is a process that converts organic or fossil-based carbonaceous materials at high temperatures (>700°C), without combustion, with a controlled amount of oxygen and/or steam into carbon monoxide, hydrogen, and carbon dioxide. The carbon monoxide then reacts with water to form carbon dioxide and more hydrogen via a water-gas shift reaction. Adsorbers or special membranes can separate the hydrogen from this gas stream.Do follow previous years question papers for better understanding of the types of questions asked.

Note: The above reaction uses glucose as a surrogate for cellulose. Actual biomass has highly variable composition and complexity with cellulose as one major component.

Pyrolysis is the gasification of biomass in the absence of oxygen. In general, biomass does not gasify as easily as coal, and it produces other hydrocarbon compounds in the gas mixture exiting the gasifier; this is especially true when no oxygen is used. As a result, typically an extra step must be taken to reform these hydrocarbons with a catalyst to yield a clean syngas mixture of hydrogen, carbon monoxide, and carbon dioxide. Then, just as in the gasification process for hydrogen production, a shift reaction step (with steam) converts the carbon monoxide to carbon dioxide. The hydrogen produced is then separated and purified.In the United States, there is more biomass available than is required for food and animal feed needs. A recent report projects that with anticipated improvements in agricultural practices and plant breeding, up to 1 billion dry tons of biomass could be available for energy use annually.

As biomass gasification is a mature technology, feedstock costs and lessons learned from commercial demonstrations will determine its potential as a viable pathway for cost-competitive hydrogen production.