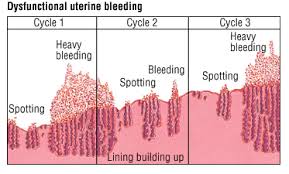 Abnormal uterine bleeding is any heavy or unusual bleeding from the uterus (through your vagina). It can occur at any time during your monthly cycle, including during your normal menstrual period.Continue Reading W.B.C.S. Examination Notes On – Dysfunctional Uterine Bleeding – Medical Science Notes.

Some young women who have abnormal uterine bleeding do not release an egg from their ovaries (called ovulation) during their menstrual cycle. This is common for teenagers who have just started getting their periods. This causes a hormone imbalance where the estrogen in your body makes the lining of your uterus (called the endometrium) grow until it gets too thick. When your body gets rid of this lining during your period, the bleeding will be very heavy. A hormone imbalance may also cause your body not to know when to shed the lining. This can cause irregular bleeding (“spotting”) between your periods.

In the years before menopause and when menopause begins, women have months when they don’t ovulate. This can cause abnormal uterine bleeding, including heavy periods and lighter, irregular bleeding.

Thickening of the lining of the uterus is another cause of bleeding in women in their 40s and 50s. This thickening can be a warning of uterine cancer. If you have abnormal uterine bleeding and you’re in this age group, you need to tell your doctor about it. It may be a normal part of getting older, but it’s important to make sure uterine cancer isn’t the cause.