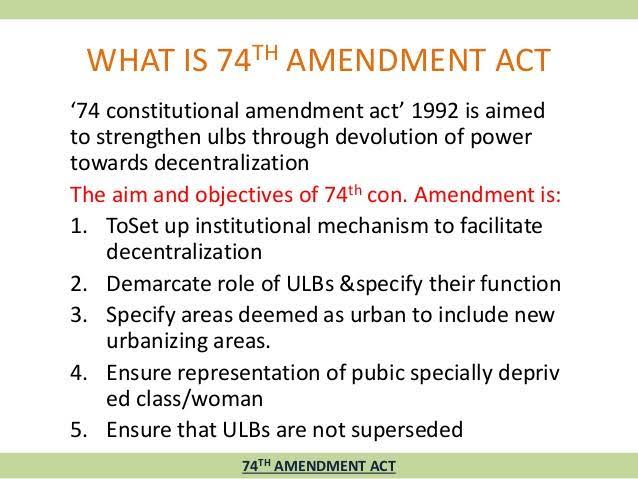 Indian Economy and Economics is considered as the significant part of the WBCS Exam. It is a relevant subject for W.B.C.S. Prelims Exam as well as rather for Main and Interview too.Economics is considered as a tough optional compared to other optional subject. If the aspirant is a graduate in Economics, then all that you need to cover the concepts and theories first. After that aspirants have to work on current affairs, additionally to give a final touch as per the W.B.C.S. Exam syllabus.Article 40 of the Indian constitution directs the government to establish panchayats to serve as institutions of local self-government. Most states implemented this directive principle along the lines of the recommendations of the Balwantarai Mehta Commission Report.Continue Reading W.B.C.S. Examination Notes On – Economics – 73rd And 74th Amendment Act.

The commission recommended a ‘three-tier’ system of Panchayati Raj institutions (PRIs), viz. the popularly elected village council (gram panchayat) as the village level basic unit. Block (block is the larger sub unit of a district) council (or panchayat saphithi) at the Block level, and the district council (or the Zilla Parishad) at the district level. Introduction of PRIs was hailed as one of the most important political initiatives in India.

Given its far-reaching consequences, the 73 rd Amendment (together with the 74th) is rightly called ‘a silent revolution’ for various reasons. First of all, the PRIs no longer operate at the whim of state governments and their laws. They are now a part of the Constitution and enjoy the status of institutions of self-government, as parliament at the federal level and legislative assemblies at the state level.

The amendment prescribes regular elections every five years and election within six months of the dissolution of any PRI. To ensure free, fair, and timely elections there is a provision for the setting up of state election commission. The most revolutionary provision is the reservation of one-third of the seats for women in local bodies, along with reservation of seats for scheduled castes and scheduled tribes in proportion to their regional populations.

The amendment lays down 29 functions to be entrusted to the PRIs. To maintain a democratic ethos, popular accountability, and transparency, the amendment emphases the need for periodic meetings of the gram sabha, composed of all adults in each village. These meetings will approve ongoing programmes and financial allocations. In brief, the amendment visualises the allocation of funds, functions, and functionaries to these bodies to ensure genuine and effective democratic decentralisation.

The Constitutional Amendment Bill came into effect from April 24, 1994. Principally, it gave:

i. The panchayats constitutional status (previously panchayat matters were considered as state subjects);

iii. The amendment stipulated that all panchayat members be elected for five year term in the elections supervised by the state election commission.To view Economics Optional Syllabus , Click Here.

There were already some women in local government prior to the passing of the 73rd and 74th Amendments. But they were few and far between. In most cases the state laws prescribed at least one or two seats for women in the old-style PRIs. Very often these seats were filled though nomination.

The nominees, invariably, were members of elite families belonging to higher castes and owning substantial land, thus enjoying high status in terms of family, cast, and class. These women were usually related to established political leaders. As symbols of tokenism, they rarely took active interest in the functioning of the PRIs. The new system of reservation and competitive elections based on adult franchise changed this situation radically.

When the provisions for reservations of seats for women were being debated in parliament, several members were doubtful that such large numbers of women would come forward to contest these seats. But these doubts proved to be wrong.

In total, for over one million seats reserved for women in all the local bodies, more than five million women candidates contested. Thus, on an average, there were five women candidates contesting each seat. Moreover, some women condition won unreserved or general seats, defeating their male rivals. Of course, such cases were not many, but they were no less significant.

It needs to be mentioned that the reservation of seats for women (and for SCs and STs) concerns not only members but also office-bearers. Thus, not only one-third of elected members but one-third of sarpanches or chairpersons have also to be women.

In the country as a whole, there are 231,630 gram panchayats (village councils). Over 77,210 of them now have women as sarpanches. At the intermediate level, there are 5,912 taluka (or block/mandal) panchayat samitis. More than 1,970 of them have women sabhapatis or heads and of the 594 zilla parishads” (district councils) 200 have women presidents. Thus, in the country as a whole, about one million women now occupy positions as members or heads in rural and urban local government bodies. This may be unique in the world.

There are variations among states in the magnitude of Women’s representation. While most states manage to meet the constitutional target of 33 per cent seats for women, in some this proportion has been exceeded. For example, in Karnataka, women occupy 43.6 per cent seats in local bodies. This means a large number of women have managed to win general (unreserved) seats, defeating rival male and female candidates. This suggests a highly significant trend for the future.

This statutory reservation for women has provided an opportunity for the formal involvement of women in the development through political process at the grass roots level thereby enabling them to influence the decisions in the local governments.