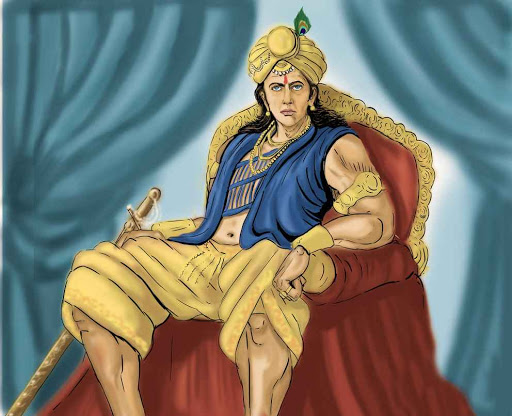 Samudragupta (reigned 335-380) is the second ruler of the Gupta Dynasty, who ushered in the Golden Age in India. He was a benevolent ruler, a great warrior and a patron of arts. Samudragupta, son of Chandragupta, was perhaps the greatest king of Gupta dynasty.Continue Reading W.B.C.S. Examination Notes On – Samudragupta – MEDIEVAL INDIAN History.

Having come to the throne, he decided to extend the boundaries of his empire to cover the multiple kingdoms and republics that existed outside its pale. Known as the ‘Napoleon of India’ for his conquests, he was also a man of many talents and laid a firm foundation for the empire. The rise of the Gupta Empire and the beginning of its prosperity are attributed to him, his military conquests and policies.

His name appears in the Javanese text ‘Tantrikamandaka’. But the most detailed and authentic record of his reign is preserved in the rock pillar of Allahabad, composed by Harisena, the court poet of Samudragupta.

Samudragupta succeeded his father Chandragupta I (r. 319 – 335 CE). Some historians, however, state that he was preceded by Kachagupta or Kacha who was Chandragupta I’s eldest son. Kacha’s identity is yet to be established, as only some coins bearing the name have been found and no other evidence of his rule has been discovered so far. The fact that Chandragupta I actually nominated Samudragupta to the throne shows that he was not his eldest son. Therefore, it could be possible that the historians are justified in saying that Kacha was the eldest son who succeeded his father as according to the ancient Indian custom of male primogeniture (his father’s own wishes on the matter notwithstanding). Thus, Chandragupta could only nominate his younger son based on his abilities but was not able to actually make him king.

It is not clear as to whether Samudragupta opposed him or that Kachagupta’s end was natural and he was succeeded by his sibling because he had no other heir. As to why Samudragupta opposed Kachagupta, if he did so at all, no information is available. What is known is that he was ultimately able to claim the throne.

Chandragupta, a Magadha raja married a Lichhavi princess, Kumardevi which enabled for him to gain a hold over the Ganges river- the main source of north Indian commerce. He ruled for about ten years in the north-central India.

After his death his son, Samudragupta started to rule the kingdom and did not rest until he conquered almost the whole of India. His reigning period may be described as a vast military campaign. To begin with he attacked the neighboring kingdoms of Shichchhatra (Rohilkhand) and Padmavati (in Central India). He conquered the whole of West Bengal befoe partition, some Kingdoms in Nepal and he made Assam pay him tribute. He absorbed some Tribal states like the Malvas, the Yaudheyas, the Arjunayanas, the Abhiras and the Maduras. The later Kushanas and the Sakas paid him tribute.

Towards south, along the coast of Bay of Bengal he proceeded with great vigor and defeated Pithapuram’s Mahendragiri, Kanchi’s Vishnugupta, Mantaraja of Kurala, Mahendra of Khosla and many more till he reached the river Krishna.

Samudragupta extended his Kingdom in the west over Khandesh and Palaghat. However he preferred to maintain friendly terms with Vatakata in Central India. He performed Aashvamadha Yajna (Horse Sacrifice) after winning every big battle.

Samudragupta’s territories extended from the Himalayas in the north to the river Narbada in the south and from the Brahamaputra River in the east to the Yamuna River in the west. His greatest achievement can be described as the political unification of most of the India or Aryavarta into a formidable power. He assumed the title of Maharajadhiraja (The King of the Kings).

Most certainly, Samudragupta is the father of Gupta monetary system. He started minting seven different types of coins. They are known as the Standard Type, the Archer Type, the Battle Axe Type, the Aashvamedha Type, the Tiger Slayer Type, the King and Queen Type and the Lyrist Type. They exhibit a fine quality of technical and sculptural finesse.

This great warrior had a benevolent heart. He showed great nobility towards all those kings who were defeated. He gave various tribal states autonomy under his protection.
His court was full of Poets and Scholars. He had a keen interest in music and was probably an accomplished Lyrist (a kind of Musical Instrument).

Samudragupta was succeeded by his son Chandragupta II, also known as Vikramadiyta (380-413A.D.). The prosperity of the Gupta Dynasty continued to flourish under his rule.