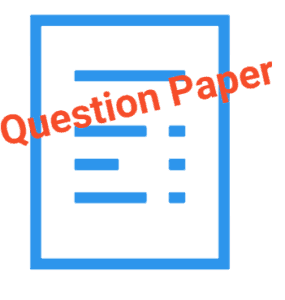 1. Answer any one of the following.Continue Reading W.B.C.S Main 2008 Optional Question Paper English.

(a) What do you understand by the term ‘Pre-Raphaelitism’ in the context of English poetry ? Who are the main poets under this category ?

(b) It has been said that William Blake’s songs convey ‘adult’ wisdom with the artlessness of a child. How far does this hold good in ‘The Tyger’ ?

(c) Would you call Tennyson’s poems representative of his age ? Substantiate your opinion with reference to the poems you have read.

(d) What would . you say are the principal qualities characterising T. S. Eliot’s works ? Justify with reference to one of his poems. 25

2. Answer any one of the following :

(a) What is the significance of the subtitle ‘A Mystery’ attached to George Bernard Shaw’s ‘Candida’ ?

(c) Discuss Oscar Wilde’s “The Importance of Being Earnest’ as a comedy of wit and manners. 25

3. Answer any one of the following :

(a) Would you consider Jane Eyre by ‘Charlotte Bronte’ a novel ahead of its age ? Justify your opinion.

(b) How does Hardy present his modern man ? Cite the example of Clym Yeobright (if possible) from “The Return of the Native’.

(c) Write a note on the contributions of the early Victorian novelists with special reference to any one of the following authors :

4. The following poem is written by a Romantic poet. Bring out the central idea and add a critical note:

On a Poet’s lips I slept

In the sound his breathing kept;

Nor seeks nor finds he mortal blisses,

But feeds on the aerial kisses

Of shapes that haunt Thoughts’ wildernesses

He will watch from dawn to gloom

The yellow bees in the ivy-bloom,

Nor heed nor see what things they be –

But from these create he can

1.  Write an essay on the literary & historical importance of Piers Plowman.

2.  Mathew Arnold called the eighteenth century an “Age of Prose”. Do you think he was justified ?  Explain.

3.  ‘The Romantic poets were not really interested in Nature ; their subject was man’.  Do you agree ?  Give reasons for your answer.

4.  Write an essay on the rise of woman novelists in the nineteenth century.

5.  Should, in your opinion, the works of Salman Rushdie and other writers of Indian origin be included in the study of English Literature ?   Give reasons for your answer.

6.  Write critical notes on any two of the following :

(a) the Wife of Bath’s Tale

(b) The Fairie Queene

7.  Write an essay on the role of dictionaries in defining the contours of language.

8.  Explain how the study of words of French origin in English can reveal the social history of nations.

9.  Write philological notes on any eight of the following :

10.  ‘The final scenes of Shakespeare’s comedies resolve most conflicts, but leave some questions unanswered’.  Discuss with specific references to any two Shakespearean comedies.

11.  ‘The heroes of Shakespeare’s tragedies are Renaissance men fighting the moral values of a feudal order’.   Do you agree with this comment ?  Argue your case with reference to any one play.

12.  Write an essay on Shakespeare’s use of imagery.

(a)  Shakespearean scholarship in the eighteenth century.

(b)  Systems of patronage of drama in the Elizabethan age.