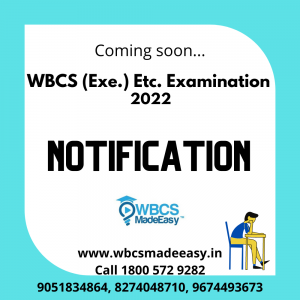 (b) For Persons with Disabilities (PWD) :-
A Medical Board constituted at Government Medical College Hospitals in Kolkata,
District Hospitals and Sub-divisional Hospitals.
[vide West Bengal Persons with Disabilities (Equal Opportunities, Protection of Rights
and Full Participation) Rules, 1999]
(c) For Meritorious Sportspersons (Applicable only for candidates applying
for the Group. D Posts) :-
Competent Authorities for issuing Certificates to Meritorious Sportspersons are
as follows :
Area Competent Authority
International Competition
Secretary of the National Federation/National
Association of the Sports concerned.
National Competition
Secretary of the State Association of the
Sports concerned.
Inter-University Tournament
Dean/Director of Sports or other Officer in
overall charge of Sports of the University
concerned.
National Sports / Games for
School
Education
Director or Deputy Director in overall charge
of Sports/Games for Schools in the
Directorate of School Education, West Bengal.

MEDICAL EXAMINATION Candidates who will be selected for appointment will be required to appear before a Medical
Board for certificates of their fitness for Government Service in the form prescribed for the
purpose.
CANVASSING Any attempt on the part of a candidate to enlist support for his / her application through persons,
officials of Government, or agencies will disqualify him / her for appointment. Spontaneous
recommendations from persons interested in the candidates, or otherwise known to them, will be
disregarded and will render the candidates ineligible.
RESULTS OF THE
EXAMINATION
The Preliminary Examination is meant to serve as a Screening Test only for the purpose of
selection of candidates for the Main Examination. The marks obtained in Preliminary Examination
by the candidates will not be considered for final selection. Only those candidates who will be
declared qualified at the Preliminary Examination in a year shall be eligible for admission to the
W.B.C.S.(Exe.) etc. (Main) Examination of that year.
The Final Merit List will be prepared on the basis of marks obtained in Main Examination and
Personality Test taken together.
The names of the candidates called to Personality Test and those recommended for appointment
will be published provisionally subject to determination of eligibility of the candidates in all
respects and verification of original certificates etc. If at any stage of such verification any
candidate is found ineligible, his / her candidature / allotment will be cancelled.
For further details and assistance the candidates may contact the following numbers
on any working day from 11-00 a.m. to 4-00 p.m.
(033) 2262-4181 [Related to Offline Payment]
(033) 4003-5104 [Related to Online Payment]
For Technical Support
(033) 2419-7715
(033) 2419-8187 Help Desk
(033) 2466-1540
Email-id :- pscwbit01@gmail.com
Page 8 of 8
APPENDIX-I
CERTIFICATE REGARDING PHYSICAL LIMITATION IN AN EXAMINEE TO WRITE
This is to certify that, I have examined Mr/Ms/Mrs______________________________________(name of the candidate with
disability), a person with ___________________(nature and percentage of disability as mentioned in the certificate of
disability), S/o/D/o_______________________________a resident of___________________________________________________
(Village/District/State) and to state that he/she has physical limitation which hampers his/her writing capabilities owing to his/her
disability.
Signature
Chief Medical Officer/Medical Superintendent of a Government health care institution
Name & Designation.
Name of Government Hospital/Health Care Centre with Seal
Place:
Date:
Note:
Certificate should be given by a specialist of the relevant stream/disability
(e.g. Visual impairment-Ophthalmologist, Locomotor disability – Orthopaedic specialist/PMR).
Page 1 of 55
PUBLIC SERVICE COMMISSION, WEST BENGAL
WEST BENGAL CIVIL SERVICE (EXECUTIVE) ETC. EXAMINATION, 2022
ADVERTISEMENT NO. 2/2022
SCHEME AND SYLLABUS
The scheme and syllabus of the examination shall be as detailed in the Schedule below :-

(A) Impact of Colonial rule on Indian agrarian economy:-
• Land revenue settlements‒ Permanent, Ryotwari and Mahalwari Settlements.
• Economic Impact of revenue settlements – Commercialization and its consequences.
• Rural Indebtedness and growth of landless labour.
• Famine and poverty.
(B) Changing nature of India’s trade and industry under the colonial rule:-
• Dislocation of traditional trade and commerce
• De-industrialization – decline of village industries and town handicrafts
• Railways
• Growth of Foreign capital and rise of modern industries.