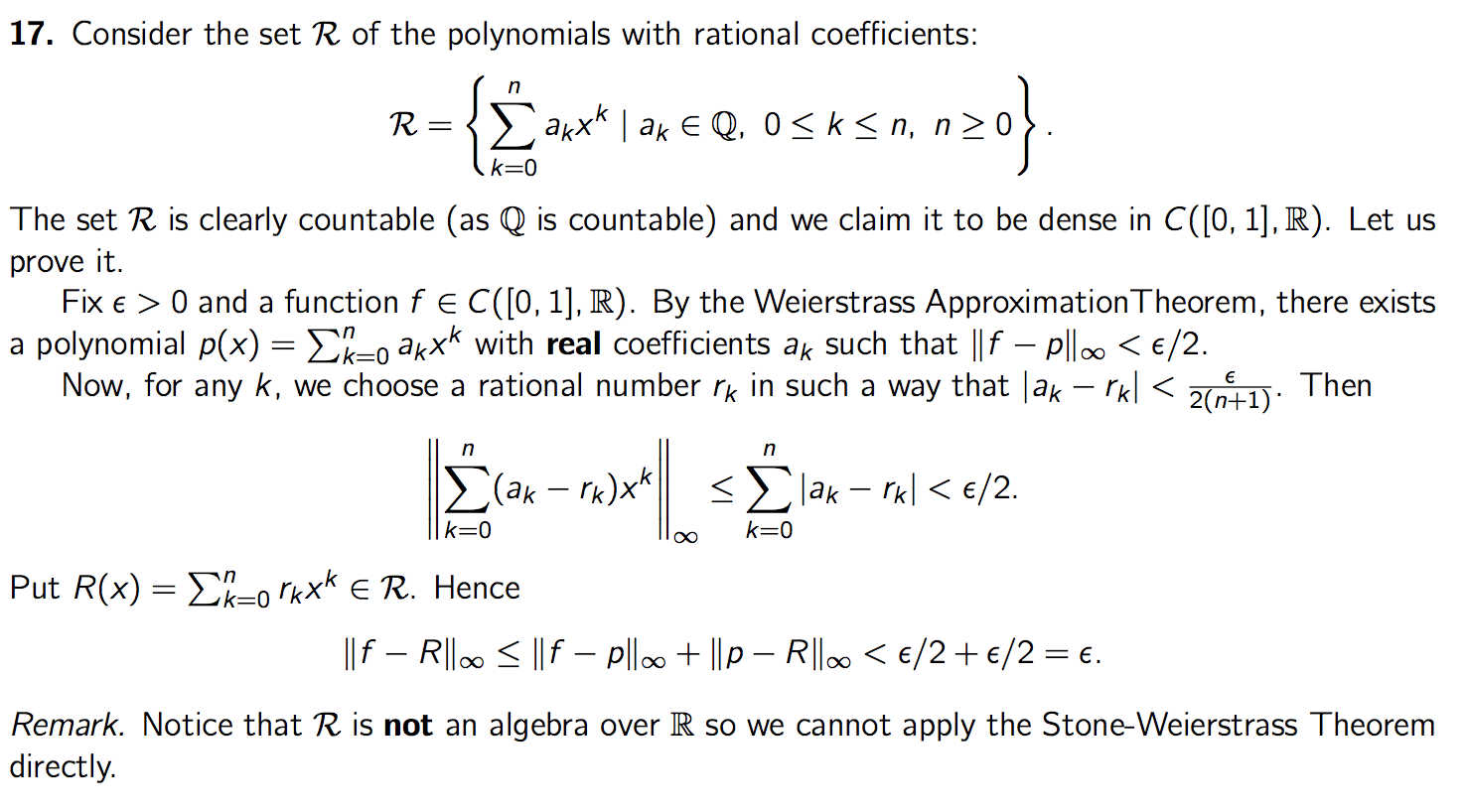 In mathematical analysis, the Weierstrass approximation theorem states that every continuous function defined on a closed interval [a, b] can be uniformly approximated as closely as desired by a polynomial function. Because polynomials are among the simplest functions, and because computers can directly evaluate polynomials, this theorem has both practical and theoretical relevance, especially in polynomial interpolation. The original version of this result was established by Karl Weierstrass in 1885 using the Weierstrass transform.Continue Reading Weierstrass Approximation Theorem – Mathematics Notes – For W.B.C.S. Examination.

A different generalization of Weierstrass’ original theorem is Mergelyan’s theorem, which generalizes it to functions defined on certain subsets of the complex plane.

The statement of the approximation theorem as originally discovered by Weierstrass is as follows:

A constructive proof of this theorem using Bernstein polynomials is outlined on that page.

As a consequence of the Weierstrass approximation theorem, one can show that the space C[a, b] is separable: the polynomial functions are dense, and each polynomial function can be uniformly approximated by one with rational coefficients; there are only countably many polynomials with rational coefficients. Since C[a, b] is Hausdorff and separable it follows that C[a, b] has cardinality equal to 2ℵ0 — the same cardinality as the cardinality of the reals. (Remark: This cardinality result also follows from the fact that a continuous function on the reals is uniquely determined by its restriction to the rationals.)

The set C[a, b] of continuous real-valued functions on [a, b], together with the supremum norm || f || = supa ≤ x ≤ b | f (x)|, is a Banach algebra, (that is, an associative algebra and a Banach space such that || fg|| ≤ || f ||·||g|| for all  f, g). The set of all polynomial functions forms a subalgebra of C[a, b] (that is, a vector subspace of C[a, b] that is closed under multiplication of functions), and the content of the Weierstrass approximation theorem is that this subalgebra is dense in C[a, b].

Stone starts with an arbitrary compact Hausdorff space X and considers the algebra C(X, R) of real-valued continuous functions on X, with the topology of uniform convergence. He wants to find subalgebras of C(X, R) which are dense. It turns out that the crucial property that a subalgebra must satisfy is that it separates points: a set A of functions defined on X is said to separate points if, for every two different points x and y in X there exists a function p in A with p(x) ≠ p(y). Now we may state:

Stone–Weierstrass Theorem (real numbers). Suppose X is a compact Hausdorff space and A is a subalgebra of C(X, R) which contains a non-zero constant function. Then A is dense in C(X, R) if and only if it separates points.

This implies Weierstrass’ original statement since the polynomials on [a, b] form a subalgebra of C[a, b] which contains the constants and separates points.

A version of the Stone–Weierstrass theorem is also true when X is only locally compact. Let C0(X, R) be the space of real-valued continuous functions on X which vanish at infinity; that is, a continuous function  f  is in C0(X, R) if, for every ε > 0, there exists a compact set K ⊂ X such that  | f |  < ε on X \ K. Again, C0(X, R) is a Banach algebra with the supremum norm. A subalgebra A of C0(X, R) is said to vanish nowhere if not all of the elements of A simultaneously vanish at a point; that is, for every x in X, there is some  f  in A such that  f (x) ≠ 0. The theorem generalizes as follows:

Stone–Weierstrass Theorem (locally compact spaces). Suppose X is a locally compact Hausdorff space and A is a subalgebra of C0(X, R). Then A is dense in C0(X, R) (given the topology of uniform convergence) if and only if it separates points and vanishes nowhere.

This version clearly implies the previous version in the case when X is compact, since in that case C0(X, R) = C(X, R). There are also more general versions of the Stone–Weierstrass that weaken the assumption of local compactness.