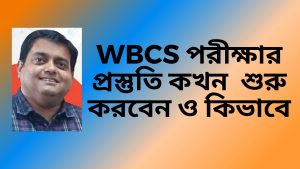 While some are known to being their W.B.C.S preparation as early as after Class 10th Board examination, many have cracked this much-coveted examination in the first attempt after preparing only for a year after graduation. Such diverse preparation timelines have put many prospective WBCS aspirants into a soup when it comes to the ideal time to start preparing for WBCS examination. Broadly speaking, the WBCS preparation phase followed by different aspirants can be classified into three different time zones.

Many students, who come from a family which has seen the rise of several civil servants from amid them, are often inspired to take up WBCS preparation right from their school days. Like every coin, even this approach has both advantages and disadvantages. Starting WBCS preparation at such an early stage in their academic career allows students to build a very strong foundation for further preparation. They can start studying NCERT school books, which are considered to be the bible for cracking WBCS exams; in detail during their school days and be well-versed in all the important topics that will be covered during the exam. On the flipside, the biggest disadvantage of such an approach is by the time these school kids become eligible to appear for WBCS Civil Services Exam, the test pattern, syllabus, trends and other things might have changed drastically, rendering the school level preparation futile. Another serious concern for students who begin their WBCS preparation at school level is of suffering from a burnout / exhaustion within one or two failure in the WBCS exam because they have been preparing for the exam for such a long time and do not have any other options to fall back upon.

Graduation, the most exciting time in the life of a student is also considered to be the golden timeframe for WBCS aspirants to begin their preparation process. This is because, generally the first and second year of graduation are pretty relaxed and allows ample amount of time to focus upon building a solid foundation for WBCS preparation, be it through self-study or by joining a coaching classes. Graduation being the minimum eligibility criteria for WBCS exams, students will be able to appear for the test immediately after their final exam, without any challenge of dealing with drastic changes in the syllabus or exam patterns. And finally, starting preparation process as soon as they meet the eligibility criteria also leaves a number of years and attempts in their kitty for cracking the WBCS exam in future. The majority of WBCS top rankers have been known to being their WBCS preparation during this phase and it has proven to be very fruitful for them. Talking about the disadvantages, students who start their WBCS preparation during graduation will not be able to participate in any extracurricular activities, which form an integral part of learning process. Just being a bookworm will not help aspirants in the long term to crack the WBCS exams.Previous years question papers are a must while preparing for this exam.

This phase is often adopted by the late bloomers, who are inspired to join the WBCS bandwagon after completing their graduation. Many have been told that beginning your WBCS preparation after graduation is too late and aspirants who do so will never be able to crack the exam. Despite this myth, the success ratio clearly shows that aspirants can crack the WBCS exam even after beginning their exam preparation post graduation. Considering that you will be dedicating yourself completely to the WBCS preparation process, you will be able to devote more time, energy and focus on it. With no distraction of graduation or school level studies, extracurricular activities and peer pressure; WBCS aspirants will be able to give their 100% to the preparation process. In addition to this, students who begin their WBCS preparation after completion of their graduation, already have basic foundational training in respective subjects, which definitely acts as an advantage for the aspirants.

Although, these three are the most popular phases during which WBCS aspirants are known to begin their preparation processes. But, there have been other cases as well, where students have also opted to work for a while after their graduation and then decided to go for the WBCS exam and cracked it successfully. The above discussion clearly shows that there is no definite or appropriate time to being the WBCS preparation process. Instead of appropriate time, what really matters is your dedication and commitment to the civil services exam preparation process and how you apply these factors to overcome challenges to reach the end goal of becoming an WBCS officer.