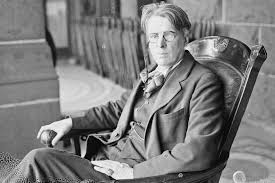 William Butler Yeats, one of the modern poets, influences his contemporaries as well as successors, such as T.S. Eliot, Ezra Pound and W.B. Auden. Though three common themes in Yeats’ poetry are love, Irish Nationalism and mysticism, but modernism is the overriding theme in his writings. Yeats started his long literary career as a romantic poet and gradually evolved into a modernist poet. As a typical modern poet he regrets for post-war modern world which is now in a disorder and chaotic situation and laments for the past.  Yeats as a modern poet is anti-rationalist in his attitude which is expressed through his passion for occultisms or mysticism. He is a prominent poet in modern times for his sense of moral wholeness of humanity and history.Continue Reading Yeats As A Modern Poet – Comparative Literature Notes – For W.B.C.S. Examination.

Now, a comparative study of Yeats with his contemporary poets is necessary. Yeats and Eliot are two famous contemporary poets and it is believed that, Yeats is the seed of modernism where, Eliot is the tree of that seed. Eliot has a great influence on Yeats. Both have certain things in common. Both are intensely aware of man in history and of the soul in eternity. Both at times see history as an image of the soul writ large. Another important similarity of Yeats with other modern poets such as Eliot, Pound is that they lament for the past and tend to escape from present miserable condition toward an illusionary Eden. In this regard Yeats differs from Auden, who celebrates all disorder conditions of his time into his poetry.

Yeats as a modern poet: Yeats, like T. S. Eliot, is a representative modern poet and presents the spirit of the age in his poetry. Like Eliot, Yeats also uses myth, symbolism, juxtaposition, colloquial language and literary allusions as a device to express the anxiety of modernity. After the World war-I people got totally shattered and they suffered from frustration, boredom, anxiety and loneliness. Yeats has used different type of landscape to symbolize the spiritual and psychological states of modern man.

Analysis of his poems: Now, let us analyze some of his poems individually to trace out modern elements –

“The Second Coming” is a superb example of Yeats’ modernism as in this poem Yeats portrays the modern chaotic and disorder condition after World War I and the poet tends to escape from this situation.

“TURNING and turning in the widening gyre/ The falcon cannot hear the falconer;/ Things fall apart; the centre cannot hold;/ Mere anarchy is loosed upon the world,”

The first image with which we are presented in the poem is an image of disaster; a falcon cannot hear the call of safety, and begins to spiral wider and wider, more out of control. The falcon which represents civilization is no longer in a position to listen to intellect. The centre is unable to hold its own. As a result, things are falling apart and what results from this disintegration is a kind of complete anarchy bringing alone with it a lot of bloodshed.  Such disorder condition also effects the religion that Yeats believes  much chaos has entered in Christianity as it has lost its effect and now it is about to end. The good people sadly lack conviction, while the bad pursue their wicked ends with passionate intensity. The second coming is at hand. This coming prophet will be the prophet of destruction. The falcon, symbolizing intellectual power, has got free of the control of the falconer, representing the heart or soul.

Then, a powerful expression of Yeats’ agony facing old age appears at the beginning of “Sailing to Byzantium”:

“That is no country for old men. The young/ In one another’s arms, birds in the tress/ Those dying generations – at their song.”

In yeats poem there is no place for old things. Yeats sees old age as a symbol of the tyranny of time. Rage against the limitations of age and society upon an old man occurs frequently in his poetry. In “Among School Children” he considers himself a comfortable scarecrow. The heart becomes ‘comprehending’, unfortunately attached to a ‘dying animal’. In “The Tower”, Yeats calls the aged body an ‘absurdity’.

In the poem “A Prayer For My Daughter”, Yeats is ever so worried with the present disorder situation and moreover the upcoming dangerous future that is near to the next generation. In this poem Yeats wishes to his daughter some abstract qualities with those she will be able to face the upcoming challenges of future. In the poem, Yeats’ prayer is not only for his daughter but also for all people of future generation.

In “Easter 1916”, Yeats sense of humanism is seen which is another modern trait in literature. The horrible effects of war cast a gloomy shadow on the poetic sensibility of the modern poets. The sad realities of life paved the way of humanitarian aspect in modern literature. Yeats’ poetry also abounds in humanism. In this poem, he feels even for his rival. He says:

“He had done most bitter wrong/ To some who are near my heart,”

Yeats’ use of symbols is another modern trait in his poetry which is complex and rich. He is the chief representative of the Symbolist Movement. He draws his symbols from Irish folklore and mythology, philosophy, metaphysics, occult, magic, paintings and drawings. Several allusions are compressed into a single symbol. His symbols are all pervasive key symbols. His key-symbols shed light on his previous poems and “illuminates their sense”. ‘The Rose’, ‘Swan’ and ‘Helen’ are his key-symbols. Symbols give ‘dumb things voices, and bodiless things bodies’ in Yeats’ poetry.

Thus, on the basis of our above discussion we can rightly say that Yeats is one of those celebrated modern poets, who flourished in the beginning of the twentieth century and created their own style of poetry in order to show their dissatisfaction with the world.